Wellington isn't home to a huge number of Michelin-starred chefs, so Adam Newell is a bit of a rare gem. Since 2000, Adam and his wife Nicola have been at the helm of Taranaki Street's Zibibbo, one of the best spots in the city for special-occasion Mediterranean-inspired meals. The British-born Zibibbo owner is not only a killer chef but also a green thumb, and his menus utilise the beautiful produce he and his wife Nicola grow on their own Riversdale property. The couple also lovingly raise happy pigs who (vegetarians, look away) eventually become exquisite pork.

Zibibbo are hosting an array of excellent events during this year's festival - there's a delicious investigation into the funky world of the truffle at All About Truffles, a five-course pork and wine feast (mate, that is my idea of heaven) with A Pig's Tale, and a new session has been added to the sold-out Looking Good food styling and photography workshop. Their Dine Wellington menu also makes my stomach rumble - a starter of game pie with pickled mushrooms, a Festival Dish of confit duck leg with Adam's favourite Wairarapa black truffle, and a dessert of wood-roasted winter fruits. Plus that insane burger that takes a classic French dish and revamps it between two buns - read on for more info:

Adam getting up close with some spring onions from his own garden in the Wairarapa.

I had a yarn with Adam via his wife Nicola, who spilled the beans on their porcine adventures and truffle tales.

Hey Nicola, tell me a little bit about your and Adam's backgrounds and how you ended up running Zibibbo.

Adam hails from England where he trained and worked with the Roux Brothers at 3 Michelin star restaurant Le Gavroche. This is where he first encountered truffles and got the chance to work with them. Adam went on to earn his own Michelin star as Head Chef of Fulham Road Restaurant in London. After that he did a stint at Le Cordon Bleu in Tokyo where I met him and he ended up in NZ. After being the opening chef at Icon Restaurant when Te Papa opened in 1998, he moved to Auckland and opened Wildfire on the Viaduct, then when I wanted to move back to Wellington (my home town) in 2000, we moved back and opened Zibibbo.

Your A Pig's Tale event explores your hijinks looking after pigs and sending them 'on holiday', all with a five-course feast of porky fare. How long have you been dabbling in raising pigs?

We moved to Riversdale in the Wairarapa in 2014 and have had a pig or a few pigs constantly since then. Friends of ours have a farm not far from Riversdale, they were getting some pigs and asked if we wanted to share a pen. Being involved with people who had already raised pigs was a great way to learn how to look after them, what the need, how much to feed them, etc.What are your favourite things to do with your ethically-raised pork?

It’s fantastic to have the whole pig to use, as different cuts are best for different cooking techniques. We make sausages, roast some pieces, slow cook others, put some on the BBQ.Tell me about why you love truffles so much.

They have such a unique flavour, there’s nothing else that will add that kind of touch to a dish. And of course being seasonal and scarce only adds to their appeal! 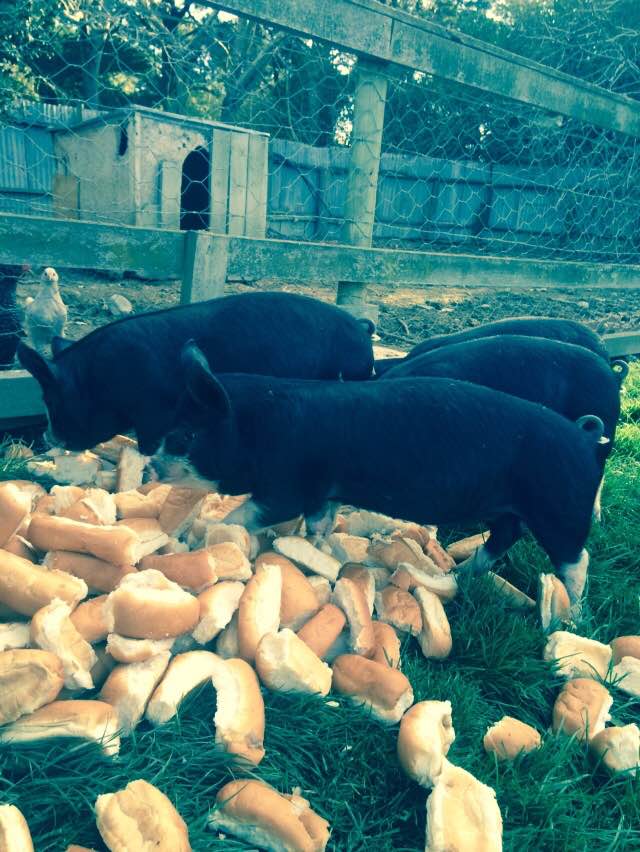 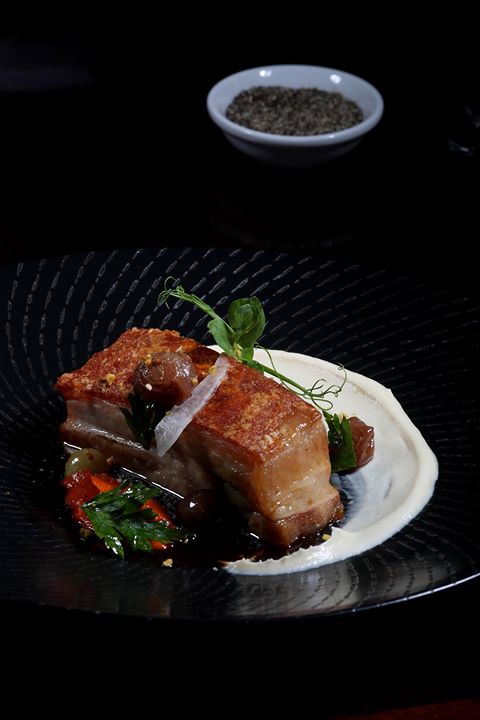 Adam and Nicola's pigs getting stuck into some scraps, and their perfect pork belly.

Truffles seem to be a hot topic this year, and you're getting up close and personal with them at All About Truffles. They seem to be a pretty highbrow ingredient, but your event promises to make them more accessible to adventurous home cooks. Do you ever cook with truffles at home?

Absolutely! A typical family dinner in the Newell house is pasta with a sauce of tomatoes, home-grown pork sausages and fresh herbs from the garden. The extra flavour from a shave of fresh truffle is awesome. I also love them on scrambled eggs and my 7-year daughter has just discovered she loves them too and wants to put them on everything.

The dish was created by thinking about the ingredients first, then putting them all together. I met Karen Aitkenhead who grows the truffles a few years back. She has an incredible product and I wanted to showcase them in our festival dish. Then came the mushrooms from Parkvale another Wairarapa producer who have some amazing products. The mushrooms are a natural fit with truffle. Thinking about the protein, I wanted something that wasn’t what people eat every day and which would go with the earthy truffle/mushroom flavours. Duck was the perfect thing! And all together with a glass of Lynford's Wairarapa Pinot Noir 2013, I think guests will leave happy.

Your Burger Wellington entry this year sounds amazing. Has there been a lot of taste testing in the kitchen to get the balance right?

The burger (black Angus beef burger with duck liver parfait and Madeira shallot aioli in a brioche truffle bun, with triple-cooked chips) is based on the classic French dish Tournedos Rossini, so we knew all the components would work well together. But there’s been a lot of taste testing around getting the exact ingredients right for the burger patty and the bun, which I think are the two key ingredients in any burger. There’s been no complaints from the staff on how many burgers we’ve cooked and they’ve had to try, and I think the final product is going to wow burger lovers this year.