The food behind the #foodporn

The cover of the Visa Welly On a Plate programme guide has become hotly anticipated. From a beautifully plated dish to profiling local culinary personalities, 2017 sees an art-meets-food effect, with some awesome results.

This year's cover image is part of a series of amazing hero images, taking the idea of VWOAP events, menus, burgers and cocktails to a new level. Expertly photographed by Jeff from Capture Studios and creative driven by the Festival's marketing manager and folk at Homegrown Creative, each image was a collaboration with a local chef or eatery.

On a striking background of hot pink, the 2017 cover image represents a dreamy, foraged Dine Wellington "Festival Dish",  brought to life by Jacob Brown, head chef and owner of The Larder. Having recently announced that they're soon to cease dinner service and become a daytime-only restaurant, it's understandable that all of The Larder's festival events are already  booked out. However, you can check out their Dine Wellington menu, with a Festival Dish that features venison with fried tendon  and kawakawa consomme. If you missed out on tickets to Bite a  Buffalo, you can still try chef Jacob's buffalo burger, but I'd advise  making a booking

Every cocktail fan worth their Hawthorne strainer knows Ray Letoa of CoCo at the Roxy is one of the best mixologists in our little city. Ray is behind this year's 'spilled cocktail' hero photo using cubes of all sorts of wild ingredients. His creative, daring and dramatic flair that combines damn delicious drinks with clever narratives has won him two consecutive Cocktail Wellington championships (read more about the awards), and he's certainly gunning for another this year with Sonntag's Journey. In true Ray style, the mocktail is bound to be just as good as the boozy version too. All the elements of CoCo's Dine Wellington menu sound pretty amazing too - I'll be digging into that Fisherman's Lunchbox burger ASAP.

Egmont Street Eatery have swiftly become known for their burgers, taking out the Burger Wellington 'Best Burger' title in 2015. Having tried their past Burger Welly entries for breakfasts, lunches and dinners, I consider myself a huge fan. The restaurant's Simon Pepping was a natural choice when it came to the task of creating an impossible burger of Kiwiana ingredients to embody this year's festival theme - 'celebrating food as part of New Zealand's food culture'. Egmont is bringing kai moana to the forefront with the Filet-O-Cray burger featuring crayfish tartare, crumbed crayfish and squid with pāua salt-dusted fries. Their Festival Dish is bringing Barry Crump's vision to life, with a wild pork, celeriac and pickled turnip dish that sounds strange and magical.

Shepherd Elliot is behind two of Wellington's most loved restaurants - one has been around for ages and one is a new kid on the laneway. He brought his unique culinary viewpoint to the NZ shared-plate hero image. Tickets to the event The Number of the Feast at Shepherd were snapped up and Ti Kouka is taking Dine Wellington bookings now. This inner-city hideaway has placed highly in Burger Wellington for a number of years, and this year they've created the aptly named 'Cheesy Spicy Cow Pig Burger'. To explain any further would be pandering. You know what to expect from this. 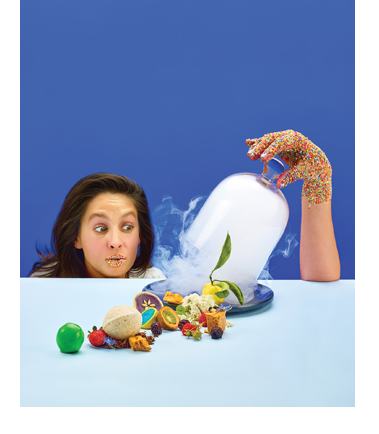 Jano Bistro have quickly become known for their incredibly innovative food and their unusual and exciting use of ingredients. When tasked with creating a spread that sums up the delicious mayhem of the Visa WOAP Festival Events lineup, chef and owner Pierre-Alain Fanoux created this dramatic cornucopia of spherical kai spilling out, with cameo appearances from thousands of hundreds and thousands and Visa WOAP team members. Washing those off was sure to be fun. I am terribly excited about Jano's Dine Wellington menu this year, which features their fine dining spin on Friday night takeaways, BBQ, flat white and tinned spaghetti.

Be in to win a voucher to devour Ti Kouka's Burger Wellington for you and three mates! COMP CLOSED