For a few years I lived in a wonderful little apartment on Taranaki Street with a world of temptation – of the food and beverage kind – waiting just outside my front door. But as much as I loved living in the heart of the city, the downside began to manifest itself more forcefully. Being woken at 3am by secret trysts or drunk flautists (I kid you not) below your bedroom window is not ideal. I told my friends the noise was getting worse; my friends told me I was just getting older.

So when my then-flatmate bought a house in Berhampore and offered his spare room to rent, I said yes. Being back in the suburbs has brought not only peace and quiet, it’s introduced me to the foodie treasures to be discovered in my ‘hood and neighbouring areas. We all have our favourite local haunts – Visa Wellington On a Plate is the perfect time to check out what’s going on in other ‘hoods.

More than a quarter of this year’s venues can be found beyond the Wellington CBD limits. Also, The Wellington Food Truck Rally will be taking VWOAP on the road, with stops in Wellington City, Lower Hutt, Upper Hutt, Porirua and Kāpiti. I’m making it a personal mission to cast my VWOAP net wide to explore parts of Wellington that I’m not familiar with. Slip on your walking shoes, or grab your bike – we’re going on a tasty tiki tour.

First stop: Miramar. CoCo at The Roxy will be having a very busy VWOAP with five events and a complete makeover of their restaurant space. For 17 days, Coco at The Roxy will become The King of Creole, a New Orleans-inspired pop-up dishing up southern favourites like Oysters Rockefeller, fried chicken, gumbo and grits.

Each event at CoCo this year promises to be surprising and unforgettable. In Drink The Dresses, resident cocktail alchemist Ray Letoa will fashion drinks based on garments from an up-and-coming New Zealand designer. It’ll be a stylish night out with a runway show, a high-tech AV projection set-up and Ray’s distinctive brand of creativity. Kids aged 6-10 will also get creative in Roxy Rocketeers Milk Bar, a hands-on event where there are no rules and making a mess is encouraged. This “self-serve food and beverage workshop” will keep your kids busy making their own burgers, sodas and ice cream.

As inaugural winners of Cocktail Wellington, Coco and Ray are hoping to make it a repeat with their Welly(On)Wood cocktail. This year, Ray has opted to showcase Borthwick Winery with a nitrous-infused spiced Pinot Noir and gorse flower foam. The natural spice flavours of the wine are enhanced with cardamom, cloves, cinnamon and pepper, and the foam adds a bit of citrus and honeyed sweetness to round things out. The cocktail is served with a trio of moreish dumplings – creamed pāua, spiced kumara and mussel – with everything presented on a piece of driftwood and garnished with natural elements from around Wellington.

Don’t forget to stop by The Larder (a Festival Dish finalist) where chef Jacob takes food to another level and will introduce you to new cuts of meat such as elk or kangaroo (strewth! Their Burger Welly creation sounds like a little ripper). 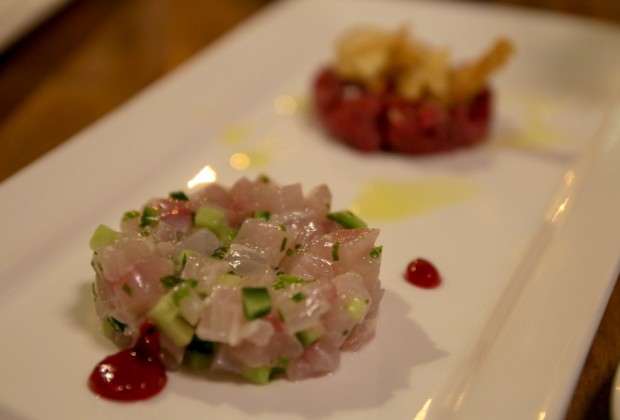 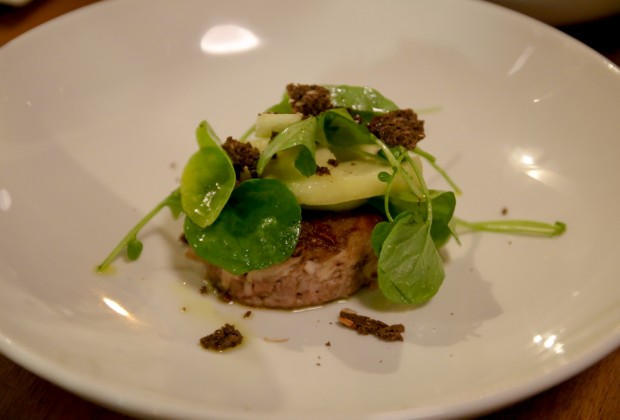 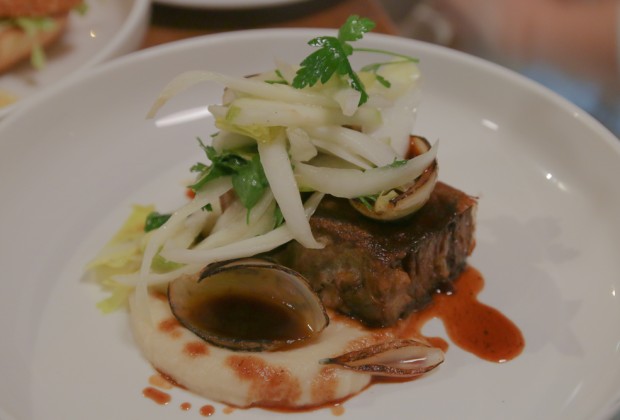 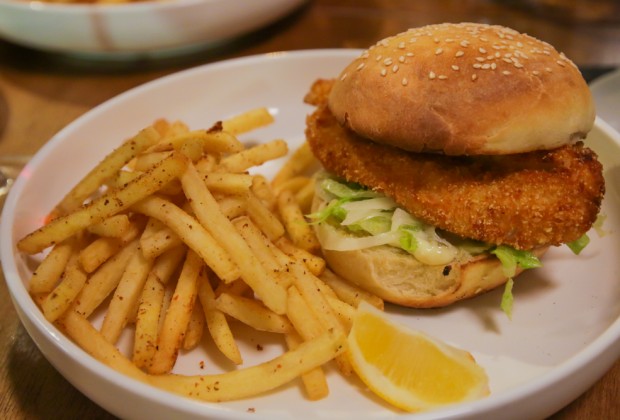 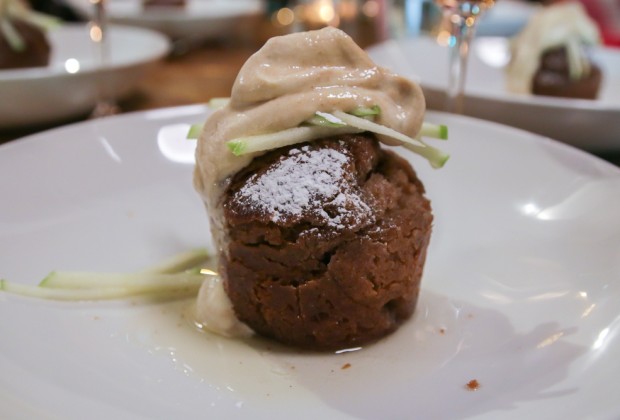 For the last year and a half, Salty Pidgin have firmly established themselves as an excellent reason to make the climb up to Brooklyn for their fresh, seasonal food and excellent selection of craft beer and top-quality wine. A few weeks ago I had the fortune of previewing their Dine Wellington menu and Burger Wellington entry with some of the VWOAP crew.

Things got off to a great start with an exquisite duo of tartars, though I was particularly taken by the peppery truffled venison tartare. Another highlight was the filo pressed beef with bacon emulsion and pear witloof salad. This was a “wow!” moment for me – rustic but decadent, big in flavour but not rich. And then there was the burger: a polenta panko-crumbed fish fillet with clam seasoning and jalapeno mayonnaise. Everything you want in a solid fish burger is there: it’s light, crisp and fresh, the savoury tang of the clam cuts through the oiliness of the fish, and the jalapeno adds a little heat to finish things off.

Petone has always been a special place for me because it’s where my Mum and her siblings grew up. They still refer to shops on Jackson Street by what they used to be back in the 60s and 70s, so when we had a family dinner at Oli & Mi Kitchen Mum and my aunt made sure we knew that we were eating in the very room that they used to have their teeth checked by their dentist. These days there’s no trace of the building’s former life as a dental practice, and the only tools getting anywhere near your teeth will be cutlery.

Oli & Mi are one of the latest additions to Petone’s cast of much-loved eateries. The heritage list building is a magnificent venue that is welcoming and intimate. Oli & Mi’s cuisine is self-described as “modern fusion”, a phrase that I admit brings out by best side-eye/head-tilt/arched eyebrow triptych, but my family and I were impressed by the subtle incorporation of Asian flavours in their modern European dishes. My Dad is super fussy when it comes to dining out but even he couldn’t stop talking about how much he enjoyed the meal days later. I think it’s a hint that he wants me to take him back for VWOAP, and why wouldn’t I with a Dine Wellington menu that features beef four ways (cheek, short rib, oxtail croquette and roasted bone marrow) and Havana coffee crème brûleè with Kāpiti mascarpone and salty caramel marshmallow. My love affair with Petone will undoubtedly live on.

Sometimes, getting out of the city means that you get to experience something different that you can’t get anywhere else. Topor Bistro is New Zealand’s only Polish restaurant, serving authentic Polish and European cuisine just a stone’s throw away in Plimmerton. Locals have embraced this restaurant with relish, though Topor also attracts return visitors from as far as the South Island, some of whom plan their entire trips around the meals they’ll be having there.

Vodka is a big part of the Polish dining experience, and Topor’s staff can recommend vodka matches for your meals. There are about 27 vodkas on offer, including a selection of housemade infusions (the salted caramel infusion is very popular). Topor’s Cocktail Wellington entry is a soothing hot vodka cocktail with lemon, orange, honey, spices and vanilla. It’s served with bigos (a meat and sauerkraut stew), so this will be a warming winter treat. Plimmerton railway station is just a quick stroll from Topor, so getting there from Wellington is very easy (and you’ll be able to partake in the vodka). Bookings are strongly recommended for this cozy little restaurant.

Raumati’s The Waterfront celebrates local suppliers and fare with both their Burger Wellington and Cocktail Wellington entries. This former sports bar has been completely renovated to reflect their more modern and welcoming direction, with bamboo flooring and nautical-themed details throughout the bar. It was a ghastly stormy day when I popped in for a visit, but I could still easily imagine what a sweet spot this would be on a summer’s day, with a cocktail in hand and the ocean view to take in. Co-owner Ricardo Reis reckons Kāpiti will be the next big thing for food in the greater Wellington region, and once the new Kāpiti Expressway opens it’ll be so much quicker and easier for out-of-towners to drop by.

The Waterfront’s Caught in Kāpiti is a refreshing cocktail that invokes Kiwi childhood nostalgia with homemade L&P and raspberry syrup, Koast Limoncello and plenty of fresh lemon juice from fruit grown by locals. It’s light with a wonderfully fresh lemon pop that isn’t bitter or too sour. To complete the nostalgia flashback, it’s served alongside some salaciously savoury mousetraps – though these ones are probably a little fancier than the ones you had as a kid, featuring Kāpati Kowhai Gruyère and toasted ciabatta.

For Burger Wellington, The Waterfront will be offering Ferdy’s Whitebait Burger. The centrepiece is the whitebait “fritter”, though it’s more akin to a soufflé – light but eggy, and packed with delicious Waikanae whitebait. It’s finished off with pickled cucumbers and fresh lettuce to add tang and crunch. It’s well worth the trip up the coast.